Expand Your Reach for Apparatus 1 grads

As all elements of our lives continually change we should also change how we challenge what we do in our teaching. Come explore the possibilities with this workshop of taking the Pilates Principles and variations of the original moves to new choreographic variations. Reaching the ultimate goal of improving people's posture by challenging them off the mat in standing variations. The sequences together with motivational music to help with the flow makes this session creative and challenging. 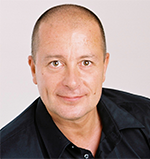 Michael has been working with the Pilates technique for over 34 years. He originally worked with the technique as a dancer at the London School of Contemporary Dance. In 1982 he opened his own studio, Body Control, in connection with the newly formed Pineapple Dance Studios in Covent Garden London.
Two years later he was offered a position in Texas managing the Pilates studio at the Houston Ballet Company where he stayed until 1990. During this time sponsored by the Houston Ballet Michael travelled across the USA visiting and training at studios. In New York with Carla Trier and with Romana Kryzanowska at the original Pilates Studio in New York.
Michael also worked in the Voight Centre in LA for five years teaching fitness programs as as well as at many other Pilates Studios including Winsor Pilates in Los Angeles.
He moved back to Europe in 1995 where following a two year contract in Switzerland he returned to London. Michael was the founder and Director of the Pilates Institute UK until 2008 and has since been running his own training school Michael King Pilates
Michael's reputation as a renowned presenter both in Fitness and Pilates has been established since 1980. His training programs are now taught in over 30 countries worldwide and has been instrumental in the development of national and international standards in recent years.